What is a Hard Part Haircut?

Unlike the side part, the hair is trimmed to the scalp with the sides left short and the parting distinctly visible when having the hard part hairstyle. This hair style matches well with fades, undercuts, combovers and spikes because of the striking contrast created by shaving the part.

How to Cut Hard Part Haircut

How to style the Hard Part

There are no such rigid guidelines for having a hard part, as this is not actually styling the hair, instead creating a line along the scalp.

The Quiff: The Quiff hairstyle can very well complement the hard part haircut, where the hair on the back and sides are kept shorter than those on the top for easy styling.

The Undercut: The hair on the sides and around the ears is cut very short to the skin to form an undercut to create a contrast with the long hair on the top.

The Flat Top: The flat top haircut involves the hair on the top to be cut short so as to make them stand up and thus forming the shape of a deck.

Here you will find 15 of the contemporary hard part hair styles that have been chosen carefully. If you can get this mid skin fade pomp over with hard part hairstyle perfect with a number of hard lines created on the shaved sides, there can be no better hairstyle to enhance your features. The patterns of the hard lines make this hairstyle more creative and innovative.

Afro Fade with Hard Part and Line Up This hard part fade hairstyle is a popular one with black men, where the hard part is on one side close to the ears and a line cut from one side to the other along the forehead. Curly hair on the top will be perfectly matched to enhance the hair style. 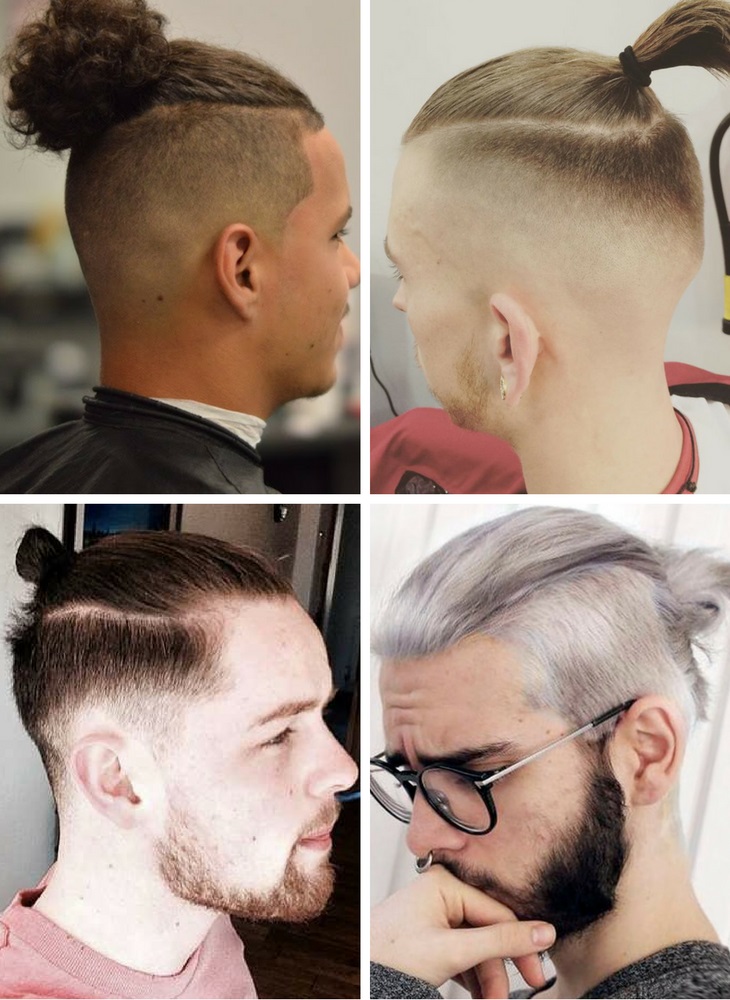 This is one of the most modern mens hairstyles hard part. The hard part is created by a line circling the top part of the hair, which is formed into a bun by pulling the long hairs and tied with a knot. This separates the crown hair to add to the style. This hard part Mohawk hairstyle is a creative one and perfectly compliments the hard part. The hair on the top is cut short and the hard part is noticeable at the back close to the neck. The sides are fade to create a striking contrast to this hairstyle. Spiky hairstyles can go well with hard part hairstyles and this one is an example which clearly showcases the compliment of the hair style. The hard part is on the side and the hair on the top is spiked by using a hair product. The sides are cut short to the scalp. The neatly trimmed side hairs and the combover hair on the top are all done in a perfect way. The hard part is a striking contrast to the combover and the fade adds to the comb over hard part style. Even the facial hair is trimmed to perfection to compliment the hairstyle. In this hairstyle the hair on the top are kept long and tousled. The hair on the side is cut to medium length and the area around the ears are fade with two hard part being noticed on the same side of the fade. A long beard matches the hairstyle perfectly. This is one of the modern men’s hard part haircut, where the hard part starts at one point and circles round the top of the head to end at another point. This razor shaved haircut is an experimental one and can add life to even the dullest hairstyles. Here the hair on the top is long and styled to be a short pompadour. There are two hard parts forming a triangle and separating the pompadour with the side undercut. The sideburns just stop at the beard line to make the whole style unique. This is a hard part hairstyle where the waves look more stunning because of the hard part which is made deep in order to form a contrast with the back and the fade sides and the wavy hair. This hairstyle is easy to style and needs minimum maintenance. In this hairstyle you will need the long hair on the top to be combed over neatly to one side and the hard part cut narrowly and not deeply to form the demarcation between the comb over and the fade side. It minimizes the stubble appearance. The hard part hair styling with Faux Hawk and a high parting is easy to style. Here the faux hawk is slicked back with the high parting stretching from the forehead right up to the crown, making the hairstyle unique. The versatility of the sidelines is evident here. Braids are popular among all hairstyles ad when combined with hard part, the hairstyles look amazing. In this hairstyle the long hairs on the top are braided in a Viking style and the sideline is automatically created round the braid. This is a truly creative hairstyle. In this mid skin fade pomp over with hard part hairstyle, the pompadour is given an extra height unlike other pompadour styles. The curvy sideline, which is deeply cut with a razor completes this haircut to look modern. The extra height of the pomp is achieved by blowing the hair.

All you need to flaunt these mens hairstyles hard part is to take help of a professional barber.

The Under-Cut Vs. The Fade