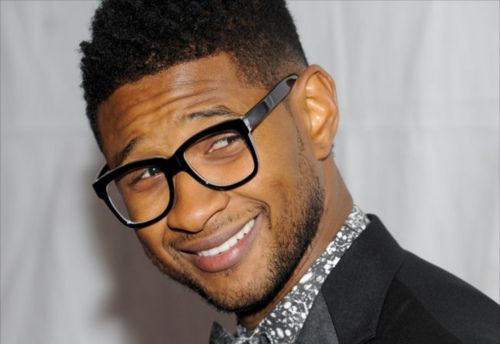 Usher Haircut Styles: Black men in search of flaunting the latest hairstyle can find a hairstyle from among a range of usher haircut styles that are truly inspirational and include the Mohawk style, the buzz cut, and the burst fade. To wear the usher hairstyle that could perfectly match your face shape and the texture of your hair, you will need to choose from the collection of pictures of usher hairstyles and tell your barber to follow.

Take for instance the usher south of France haircut, where you will need to style like a Mohawk or a frohawk. This haircut is a relatively softer shape and low height haircut This haircut will need a four-dimensional haircut, where you will need to keep the hair on the top to at least 2 inches in length with the sides having a burst fade. To get a curly hair like Usher, you will need to use a hair gel and a natural texturizer. Get your hair treated with a curl enhancing shampoo and after drying your hair, use a curling machine to style permanent or temporary curls.

Here are 15 usher hairstyles that we recommend you to choose from.

Usher is known for his range of fade hairstyles and the Mohawk fade is one of them. Here both sides of the head are faded with a strip of long hair left at the top. A close shaved beard adds to the style. You can also have a wider Mohawk like Usher used to have.

The Buzz hairstyle with Clean Edges

The hair all around the head is buzz cut using a clipper set to a low guard size. The edges on the temples and the line over the forehead are made sharp with a razor. The sides just above the ears are slightly faded.

The burst fade around the ears is the main feature of this Usher hairstyle, where the naturally curly hair is highlighted. The hair grows from short to long from just near the ear as it tapers up to the top of the head. Usher wears a glass to compliment this hairstyle.

The Usher Mohawk with Fade Hairstyle

This Usher haircut is a dashing one, which he got just before releasing his album “ Looking 4 Myself”. This style, introduced by Curtis Smith ultimately became a fashion. With the sides having a slight fade and some length of hair on top, this hairstyle is a low maintenance one.

The hair on the top is shaped in a buzz cut Afro style and designed like a box. The sides are given a fade with a beard ending well below the ears. Sideburns are absent and this hairstyle looks cool and smart for black men.

This hairstyle resembles the South of France hairstyle, where the sides have a fade and the Mohawk is styled in a gentleman’s way, not like the usual Mohawk styles which are crazy and wild. You will need to go to a professional barber to have this hairstyle perfected.

The fade cut tapered Afro Usher hair style is a high sitting hairstyle, where the lines are very clean and sharp. The sides are faded gradually as it goes down to have a sharp gradient effect and the angle of the Afro is cut in such way so as to create a box type design.

Usher Raymond knew how to look classy with the buzz cut fade sides hairstyle. The hair on the top is buzz cut and the sides faded. A styling product is used to retain the glossiness of the hair. This hairstyle is practically zero maintenance.

The hair on the top is cut very short more like a crew cut and the sides have a fade. A clear line is seen over the forehead and this hairstyle is made to look more attractive by wearing glasses. This is one of the most flaunted hairstyles by Usher.

This hairstyle is one of the men’s low fade haircut and is a popular black man fade hairstyle. The length of the hair decreases as it gradually goes down from the top until it disappears. The curls on the top are styled in various ways, suiting one’s appearance.

The Caesar Fade hairstyle is one of the black men fade haircuts which is very popular among African Americans due to the dark skin and hair complexion they have. The hairs are cut short on the sides, leaving longer haircuts on the top which are swept to the front side, making it different as in other fade cuts. Short borders or bangs can also be swept to the sides to add style.

Usher was fond of wearing this type of hairstyle, where the hair on the top is cut short and the sides are faded. The fade is made a little patchy with the signs of a clipper being used deeply here and there.

The natural curls are made to best use by having a buzz cut by Usher. He has the sides faded with a clear edge on the forehead to make this hairstyle quite different from others.

This is the hairstyle which gained immense fame among the African American black men and Usher was quick to follow. The natural curls are cut short and the sides have a fade. It was Curtis, Usher’s barber who introduced this hairstyle.

The Simple and Cool Buzz Hairstyle

This is a cool and simple buzz hairstyle, where the hair is cut very short with faded sides and a clean line going right across the forehead from one side to the other. Minimum maintenance except regular cropping of the hair.

Usher Raymond has ushered in quite a few hairstyles for black men, which are unique and inspirational. His barber Curtis has shown how these hairstyles could be easily flaunted while keeping the maintenance part to a minimum. Most of his hairstyles either have a Mohawk or a fade or both with a combination of beard styles and looking glasses.Choose any one of these and tell your barber to bring perfection to the hairstyle.