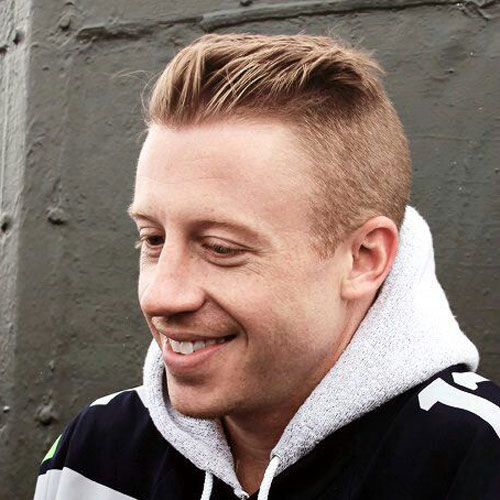 Macklemore Haircut: Benjamin Hammond Hagerty popularly known as Macklemore, is not only followed by millions for his hip hop rap songs, but also for his outfit as well as his hairstyles that make him look hot. His inspirational haircuts have rocked the world with edgy and cool hairstyles that have become the most modern trend. It is because of the contrasting hairstyles, where an undercut or under-shave on the sides creates a striking contrast to the long hair on the top.

Why is the “Macklemore” hairstyle so popular and when did it become a thing?

There are various opinions on why did the “Macklemore” hairstyle become so popular and really did become a thing. The undercut hairstyle or the hairstyles where the long hair on the top creates a striking contrast with the short back and the sides is the modern trend, being followed widely. May be the similarity of the hairstyle sported by Macklemore, where the hair on the top is kept long with bald back and the sides seem to be a co-incidence.

The crew cut has been around for some pretty good years, with many celebrities flaunting the crew cut in various ways, and the undercut, being a longer variation of the crew cut may be another reason why Macklemore shot into fame with his hairstyle. Brad Pitt and David Beckham also sported the crew cut and also by I.Q. (James Bond Jr.) Remember the haircut of Jason Newsted (circa) in the 1980s which were similar to Maclemore’s hairstyle, also followed by skaters and hipsters, which probably has made this hairstyle a thing.

This haircut became famous in the 90s, when Junior High school boys began to wear, more so because this haircut went well with a wide range of outfits, besides being a unique hairstyle. This hairstyle also fits well for tall guys having a long face like Vanilla Ice, who became popular long before Maclemore with this haircut. The symmetry of this hairstyle is also found with the Skrillex haircut and who else but Justin Timberlake became popular with the long top short sides hairstyles.

The “Macklemore” hairstyle became popular and a thing indeed not only for those celebrities who promoted it, but because of the uniqueness in this hairstyle.

How to get Macklemore Undercut

Here is a guide which you can follow in order to get the Maclemore Undercut.

Things that you will need:

Step 1 – You can wet your hair either by taking a shower or by sprinkling some water. Then clip the length of the hair, which you desire to keep on the top, about 5 inches or so.
Step 2 – Take a clipper set to a guard size no. 1 and shave the sides and the back.
Step 3 – Cut the hair, which is left, straight by combing back the hair. Pull the hair to the back in smaller amount and cut gradually, until the front has longer hair than the back. This will help you to create the right angle for styling the hair.
Step 4 – Cut the hair at the front to the desired length or you may just leave like as it is.
Step 5 – Wash off your hair
Step 6 – Brush or comb back the hair while blow drying it.
Step 7 – Apply a cream or a wax for styling as you want. Take enough cream or wax in your palms and gently apply throughout the hair, passing your fingers through the hair. Taking help of a professional barber is advised.

Macklemore Haircuts – Here are 10 Macklemore hairstyles we have given to choose from.

The Slick Back Undercut Hairstyle

The long hair on the top is slicked back and the back as well as the sides, are undercut.

Side Swept with Mid Fade Haircut

The long hair on the top is swept to one side and the sides have a mid fade. Creating a contrasting hairstyle.

The long hair is combed back with a lift being given at the front to create the waviness. He sides have an undercut.

Long Side Part with High Fade

The parting on the side is a long one and the sides have a high fade. The fade starts from about 2 inches above the ears.

Macklemore liked long hair on the top, but this haircut is an exception,where the buzz cut is complemented with a high skin fade on the sides and the back.

The long hair is combed back to the side with waves being styled.

The long hair on the top is slicked back and the sides have a high fade, which starts well above the ears.

Brushed Back Textured Hair with Undercut

The long hair is brushed back and a styling product is applied to highlight the texture. The sides have an undercut.

The long hair on the top is slicked back and textured. The sides have a disconnected undercut.

Macklemore chooses to have shorter sides rather than an undercut, leaving his long hair on the top brushed back with a slight quiff at the front.